Zoe, Your Life Force Is Running Out 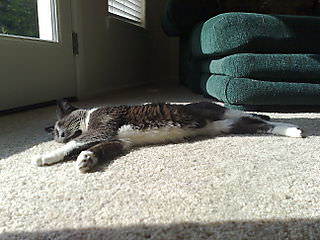 The clan is a bit somber this evening as we come to terms with the fact that Zoe (pictured left) is rapidly deteriorating. She has a vet appointment tomorrow and we're not expecting good news. We are not expecting Zoe to come home from the vet tomorrow.Several years ago, Zoe suffered kidney failure. We rushed her to the vet and, through lots of subcutaneous fluids, medication, and special food, she got back to normal. We still had to feed her special food--difficult to do when you have a second cat like we do--and give her medication to maintain her health, but she was relatively stable for the last several years.On the last vet checkup, the doctor told us her kidneys were getting worse. The medication she was taking for her kidneys was now starting to make her sick. We gave her what amounts to an antacid, which helped, but we also knew it was only a matter of time before she needed something else.Over the past few weeks, she'd almost entirely stopped eating. She hasn't bathed herself properly in who knows how long. We loosened her diet, feeding her "human food" in addition to her prescribed diet. A couple of days ago, we stopped with the prescribed diet and got her "the good cat food." My wife even got her cake donuts, which are Zoe's favorite. Zoe's still barely eating.This evening, my wife took some what we expect are final pictures of Zoe and broke the news to Jaden, who was saddened as my wife and I are. Gracie's still too little to try and explain this to yet, though if Zoe doesn't come home, I expect her to ask where Zoe is, eventually.Meanwhile, Toby (the other cat) is going to be lonely. He won't have anyone to attack or share the litterbox with anymore. He has been a lot more lovey lately, which is unusual given his usually surly nature. I suspect he knows something's not right with Zoe, but it's not like he can talk to us about it or anything.We'll see what happens tomorrow. All we can do is prepare for the worst and hope for the best.