The Pinball, She Is Getting Fixed 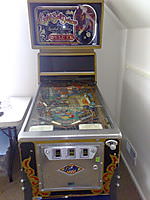 When we moved to the new place, my wife decided the pinball machine should go in the living room. Now, of course, she wants it fixed. Apparently, it will be something cool for the neighborhood kids to play with.

The problem with getting pinball machines fixed is that not a lot of people actually fix pinball machines. I called the place that owns/services a lot of the amusement machines at a local arcade. They referred me to one of their techs who does it "on the side." I called to see if/when he could come out. He's busy this week, but hopefully we can work something out for next week.

I also ordered a set of rubbers for the machine. No, not the prophylactic kind, but the kind that goes around the slingshots, flippers, and whatnot. They are starting to get worn and cracked. One of the slingshots is already missing it's rubber ring due to this. Fortunately, the sets are cheap and easy to get on eBay.

Here's hoping I can get this thing back online soon.