Finally got this out of the pinball game. 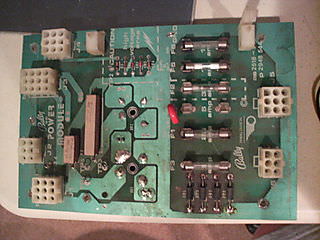 Getting this part out took me a while. Basically this board is underneath the playfield on the bottom of the cabinet. The playfield is propped up much like the hood of a car, which you can do after you remove the top glass.

Nine screws were holding this bad boy onto the rest of the power supply. Four of the screws were being particularly stubborn. Two of those I was able to get once I stuck a flathead screwdriver underneath the head just enough to get it moving. The last two, after a lot of trying, were held in place by a couple of nuts on the underside of the power supply. It was hard enough getting my fingers underneath there, not to mention a small wrench. But I got it, pulled it out, and took a picture.

Several sites suggest replacing both of these Bridge Rectifiers with higher-capacity ones that come stock with the machine. I have no idea whether or not these are stock Bridge Rectifiers or if they have been upgraded. They're still soldered onto the board. I suppose the next step is to unsolder them, though I will save that for another time. I feel pretty happy just getting the damn thing out.