It's been about a month since I've gotten my CPAP machine. So far, it's been working pretty good for me. Not that it was an issue before, I've pretty much stopped moving in my sleep. This means I'm a bit more stiff when I wake up as I tend to stay still. I also wake up quicker and generally feel like I'm sleeping better. All good things.

That said I have a CPAP that collects data, so why not look at it, right? First I tried using a tool called SleepMapper which is an online service the manufacturer of my CPAP machine Philips does. It reads the data from the SD card in my CPAP machine using a Java app (ew!) and uploads it to a website where the data can be viewed.

Unfortunately it doesn't really show me a lot of data, as you can see. Just my AHI, therapy hours, and mask fit. The app also inexplicably couldn't find new data on my SD card for a three day period.

Meanwhile I found an open source app called SleepyHead that is able to read CPAP data from a number or machines, including mine, and render a report locally. It shows me a whole lot more data: 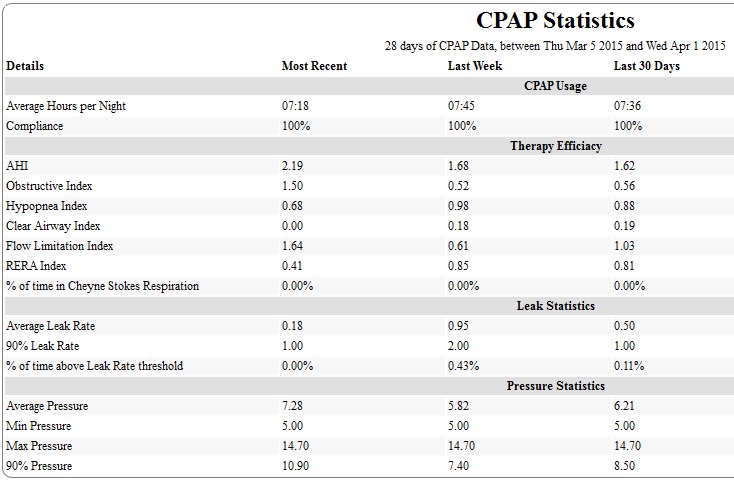 The breakdown between airway obstructions and hypopneas in my AHI is nice. It's also nice to see that, generally, my mask is fitting well except on one night when I apparently had an issue.

It also looks I needed a little more pressure than normal to keep my airway open than usual at some point. SleepyHead shows me graphs of the raw data. I can see that at around 4:40am I had an obstructive airway event that led to what are marked as "vibratory snores." According to SleepyHead's Sleep Disorder Glossary, a snore is "a loud upper airway breathing sound during sleep, without episodes of apnea."

To be honest, I'm not sure what good all this data does for me at the moment. The AHI number is low enough, which I'm sure is all my doctor will care about. I'm sleeping better, too, which at the end of the day, is why I got a CPAP to begin with.