Shoveled At, Shoveled Out

This morning, I awoke to the news that Nokia is selling their Security Appliance business to long-time partner Check Point. It wasn't what they told us was going to happen, but given the current economic conditions, this arrangement is the best way forward for everyone involved.Meanwhile, between the official meetings about the announcement and people wanting to talk to me about it to exchange thoughts, I was on the phone for several hours. After all the talking, and finally some breakfast, it was time for action: shoveling out the driveway.The driveway had accumulated about 6 inches of snow thanks to this year's snowmageddon. After last night's experience getting the minivan stuck in the snow (my fault), shoveling the driveway was now mandatory if we were to leave the house anytime soon. I started this process around 11:30 this morning.A little after 3, the driveway looked like this: 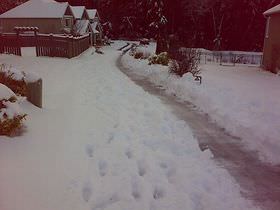 You can't see the part in front of the garage, but that took much longer than I anticipated. At 4:45, I was almost done, but the daylight was rapidly leaving: 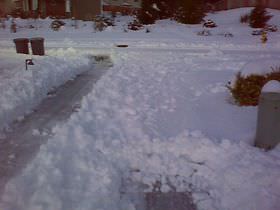 By 5:30, I finished the last of it and declared victory! 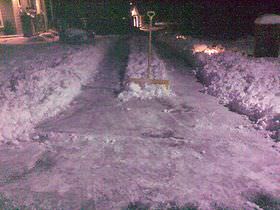 Of course, during this time, I had to take a few pauses to take Advil, drink liquid, and rest for a few minutes. The occasional neighbor would stop and talk to me as well.
Edit