I Know That Song Is Somewhere...

I was trying to find a copy of a song I know I had on CD, but I had long since forgotten what song it was on. To complicate matters, I have since gotten rid of most of the jewel cases for my CDs and I store them in CD booklets. Of course, I have saved the paper bits from the CDs, but they are not in order and would take me forever to find.

I decided to use Google to figure out what CD it was on. Turns out the song I was looking for, Point Me At the Sky, was on this CD: 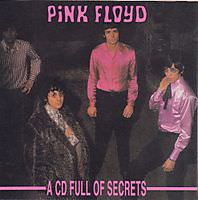 You know, there's just something about some of those Pink Floyd songs post-Syd Barrett and pre-Dark Side of the Moon that I really like. It's been far too long since I've enjoyed their sweet sounds.

"Point Me At The Sky"

Hey, Eugene,
This is Henry McClean
And I've finished my beautiful flying machine
And I'm ringing to say
That I'm leaving and maybe
You'd like to fly with me
And hide with me, baby

Isn't it strange
How little we change
Isn't it sad we're insane
Playing the games that we know and in tears
The games we've been playing for thousands and thousands and ….

Pointing to the cosmic glider
"Pull this plastic glider higher
Light the fuse and stand right back"
He cried "This is my last good-bye."