Getting my Pinball Machine Back in Order

This could turn into a big project, which I am hoping to avoid because it goes way beyond what I feel comfortable doing--getting down and dirty in the electronics!

Anyway, for the past five years or so I've had this pinball game: 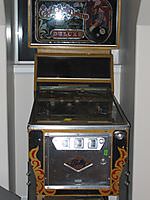 Eight Ball Deluxe is, by far, my favorite pinball game. I ended up getting a EBD Limited Edition, not because I wanted a limited edition, but that's what the guy I bought it from in Spokane had available. Either way, the game is the same. Fairly simple one-ball game (none of this multi-ball crap), no complicated ramps, but the important shots are challenging to make. It's something most people wouldn't appreciate anymore. In fact, there's only one company currently making pinball games--Stern Pinball, Inc. However, there are a ton of enthusiast sites and a few places that sell parts.My EBD machine is currently sitting up in my office. Getting it up the stairs was a production in and of itself given it's length, width, and the corner it had to go around to get up my stairs, and involved beheading the machine--makes me wish I had insisted on getting a regular EBD where the backbox folds down. It did eventually make it. Not sure if I will ever be able to get it down again, but I'll worry about that if we ever move.For the past couple of years, though, my beloved pinball game has been in a state of disrepair. It would turn on, the lights would come on, but the system would not completely start up. Gracie has suddenly noticed the pinball machine and was curious about it. "Look at the lights" she says. Well I tried to turn it on yesterday and it wouldn't even do that anymore. Dead as a doornail.So I did some hunting on the net and found plenty of information on how to repair the pinball machines. That goes a little beyond what I feel comfortable doing, but digging through the various documents I discovered that there were a series of fuses on the "Power Module," which is where the power supply hooks in. Looked under the playfield with a flashlight and yup, the F4 fuse is blown.Today, I lifted up the playfield and pulled out the fuse. When putting the playfield back down, I noticed that one of the slingshot rubbers had dried out and broken. Well, crap. I'll have to order one of those. And I should probably order some cleaner while I'm at it.Meanwhile, I'll head over to the hardware store tomorrow and see if they have the fuse I need. I suspect those are a little easier to come by than the 4 inch rubber ring that's used by the slingshot. At least that way, I'll know whether or not I'll want to call in the expert to have a look at it.