First Memories of Dark Side of the Moon 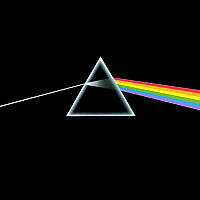 You know, considering how well Dark Side of the Moon has stood the test of time--hell, it's as old as I am and Roger Waters is still playing these songs in concert, even today--I've never really thought about what attracted me to this album. Yes, I mean album in the conventional sense of the word.I remember when I was probably four or five and I was able to climb up on a chair and work my mom's LP player. I know I put on a few Sesame Street albums (probably 45s) and Peter Pan that my mom had picked up on some old 78s, but one of the first adult albums I remember putting on was Dark Side of the Moon. Specifically, I would put on side 2, which is where the song Money begins. And yes, that was my favorite song for a while, even though it had that naughty little bullshit word in it, which I had the good sense not to say in polite company. Time might have been my second favorite. I can't remember.One of my favorite cassette tapes I had when I was 7 or 8 was Dark Side of the Moon on one side, Wish You Were Here on the other. For some reason, though, whomever recorded the tape had put Side 2 of Wish You Were Here first. So instead of hearing Shine On You Crazy Diamond first, you heard Have a Cigar first. Which threw me off when I later realized that mistake. For a while I persisted in listening to Wish You Were Here that way.To this day, I have no idea what was going on in my little mind that made me latch onto Dark Side of the Moon and later Wish You Were Here at such an early age. Maybe it was my way to be just like my parents. I can attribute my taste in Pink Floyd to mom and The Eagles to my dad. Considering some of the other things I saw both parents partake in, listening to their music was probably the safest of the choices I could have made.