Ultra-processed hyper-palletable food is way more prevalent nowadays in rural areas and, unlike what this article implies, it's often cheaper than real food. A recipe for bad health outcomes.

The Test You Want a Zero On

A couple weeks ago, I posted I was going in for a CT Angiogram to get a Coronary Artery Calcium (CAC) Score. The CAC score, which is a measure of how much calcium has built up in your heart, can be anything from a zero to over 1000. Generally speaking, the higher your CAC score, the higher the risk that you'll have a heart attack.

When combined with something like the MESA Risk Calculator, which only takes into account things the kinds of things a doctor can assess in their office, the CAC score is significantly associated with the occurrence of major cardiovascular events, which includes all-cause mortality, cardiac mortality, and nonfatal myocardial infraction.

Knowing your score, as Ivor Cummins says, really helps you understand your risk of cardiovascular events. He covers this quite succinctly on a recent episode of his podcast. While he publishes his podcast in audio form, I highly recommend watching Episode 12 which includes all the graphs.

I finally got the results of the test today. The result: a CAC score of zero. Based on that score alone, my risk of a cardiovascular event over the next couple years is less than 2%. I still have elevated blood pressure, and technically a diabetic, so my risk is a little higher according to the MESA Calculator--about 3%. Which is still pretty low in the grand scheme of things.

More importantly, it means I don't need to take a statin, which my doctor has been trying to get me to take again in light of my higher than normal cholesterol. With my risk profile and a CAC score of zero, statin use is not warranted.

Should I Continue Feeding the Medium or Nah?

When trying to import the last couple of blog posts into Medium, I discovered that Medium couldn't parse the posts since 10 Centuries went to version 5. Instead I wrote a new, single post that summarized the last couple, since they are part of the same thought process.

I noticed when I created this post that Medium is now actively encouraging writers to put their stories behind their paywall, which is a $5/mo subscription. Even without a subscription, you can typically read 3 stories for free per month. You can read a lot more than that by using an Incognito browser window, so it's not that strong of a paywall.

Aside from funding the service, the subscription pays writers who "earn money when subscribing members read or applaud your work." Also, Medium "may" promote these "behind the paywall" posts, so you may get more readers.

This is a lot like what's going on with podcasting right now, specifically all the attempts to create "networks" and "exclusivity." For example, Gimlet Media and Anchor were purchased by Spotify, and then just today, something called Luminary is attempting to do the same thing Medium is doing with written content.

As Adam Curry has said numerous times, and experienced when he was running Podshow/Mevio, you can't monetize the network. This lead to him and John C. Dvorak pioneering the value for value model with No Agenda, which has been going strong for 11 years funded solely through listener support.

Personally, I don't write blog posts for the money. I'm not sure I want to feed efforts that are ultimately doomed to failure, either, whether it's content or my eyeballs.

If Anything, My Heart is Too Big

When I posted I was going in for a CT Angiogram, a few people made the snarky comment that I didn't have a heart. Turns out, I do, and while the amount of calcium I have in my heart isn't a concern, the diameter of my aorta is.

Unfortunately, I didn't get to talk to my doctor about this yet, or the vascular surgeon my doctor has referred me to, so I've consulted Doctor Google, which turns up works like aneurysm, when left untreated. I suspect it's part of the overall damage that has occurred due to past lifestyle choices, not my current ones, which allowed be to drop my A1C down to non-diabetic levels and more than 100 pounds.

That said, even with the positive changes, my blood pressure is still a bit elevated. I'm not taking meds for this currently and I fully expect this will come up in the conversation with my doctor again. I'd rather understand the underlying cause of this rather than medicate the symptoms, so I definitely need to do a bit more research on this.

With the changes made to the 10Centuries service recently, I scrolled through the "archives" of my posts here and realize: the nature of "blog posts" have changed.

Prior to the invention of microblogging by Twitter in 2006, if you wanted to post anything on the Internet, large or small, you had to post it on your own blog. Now, with Twitter, Facebook, and all the other social media, you have…many choices.

Of course, a blog post can still be whatever you want it to be, but it seems the only thing you see on blogs now are…longer posts. Is that a good thing? Not sure.

If there's one thing I can take away from this experience, it's that I should really look at having data migrated daily in an automated fashion during the development phase.

Having just went through this myself with the CheckMates Community, it would certainly help but may not truly find out what issues the migration will cause until you rip the band-aid off. It's a month after our migration and I'm still finding small issues here and there.

If I've done this right, I should be able to share this thing I'm typing in Google Keep and share it as a blog post on my 10C blog.

And it seems to work. Right on.

77% of orgs lack a cybersecurity incident response plan. I'd be surprised if this number was low.

As I mentioned last time I posted, my doctor wrote a prescription for a statin drug because my cholesterol was too high. Even though I told him I wanted to see what a calcium scan first.

Turns out, they're doing something a bit more involved. Not at this place, but it's the same basic procedure. Will admit that I'm a bit more nervous about this than I should be, mainly because they are adding things to my blood and giving me drugs in order to do this procedure. That said, if they're gonna take a look at my heart for calcium, why not check the valves while they're at it?

Maybe I'm also a little nervous about what I'll find out. Either way, I'll know the score and can make a more informed decision about jumping back on the statin train.

On a lark, I decided to log into my health insurance website to make sure I had an up-to-date insurance card, given we changed plans recently. Noticed something important was missing: no Primary Care Physician was chosen. On my current plan, that could have been an annoying, expensive mistake. Which, given what I pay for health insurance—it's more than the mortgage payment on my first house was—would have made me very angry. Glad I caught it. 😬

Meanwhile, I will have to take it easy tomorrow. No coffee or anything that will get my heart racing.

I Can't Remember The Last Time I Weighed That, Part 1

We're almost two years into my experience with intermittent fasting and eliminating sugar and grains from my diet, which I primarily began to reverse Type 2 Diabetes. Where I started from in May of 2017:

After losing 80 pounds in the 10 months that followed, my weight has been hovering around 230 pounds for a little over a year. Which, given the insane amount of travel I've been doing, is an accomplishment. 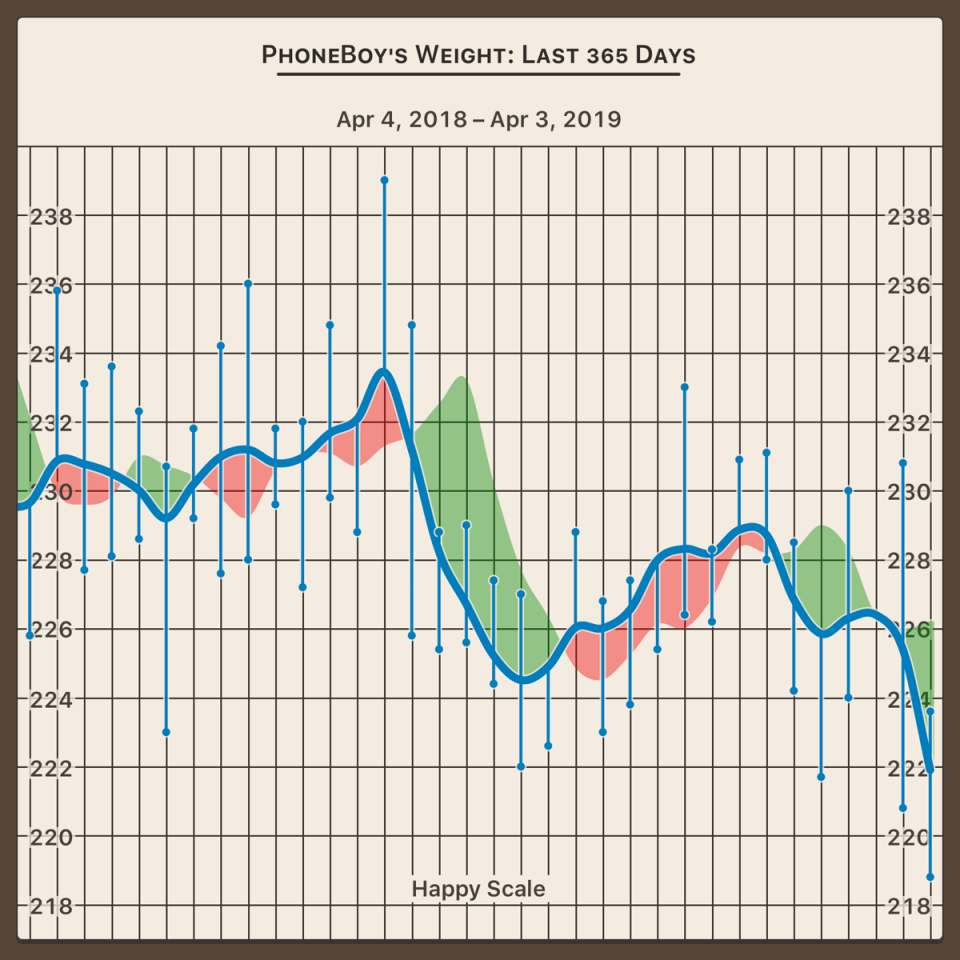 Earlier this week, my weight finally got below 220 pounds (which is under 100kg). It's the first time I've seen a number that low on the scale in maybe 15 years. The sad thing is: I don't remember exactly when I weighed it, nor do I remember the lowest number I remember seeing this century: 215 pounds. I'm awfully close now.

What am I doing that's different than before? A few things:

I've stopped doing extended fasts for the most part (more than 24 hours). I usually eat only once a day, though sometimes, when traveling, I will eat twice a day.

The only real concern from my last blood test was my cholesterol. I understand your lipid profile can be easily manipulated, so absent some other information, I'm not concerned. My doctor, on the other hand, immediately wrote me a prescription for a statin.

Last time I visited my doctor, I told him in no uncertain terms I was not taking a statin until I got a coronary artery calcium (CAC) score. This is obtained by having your heart scanned with a very rapid CAT scan device, which quantifies how much calcium you have in your arteries. The higher your score, the higher your risk of atherosclerosis or coronary artery disease (CAD).

I have the CAC score procedure scheduled for the end of next week. Based on that, I can make a much more informed decision about whether the potential side effects are outweighed by the potential benefits.