While it's pretty typical for me to go somewhere between 16-24 hours between eating these days (depending on the day), it's been a while since I've gone much longer than that.

This Labor Day weekend, I ended going longer than I've ever gone before. 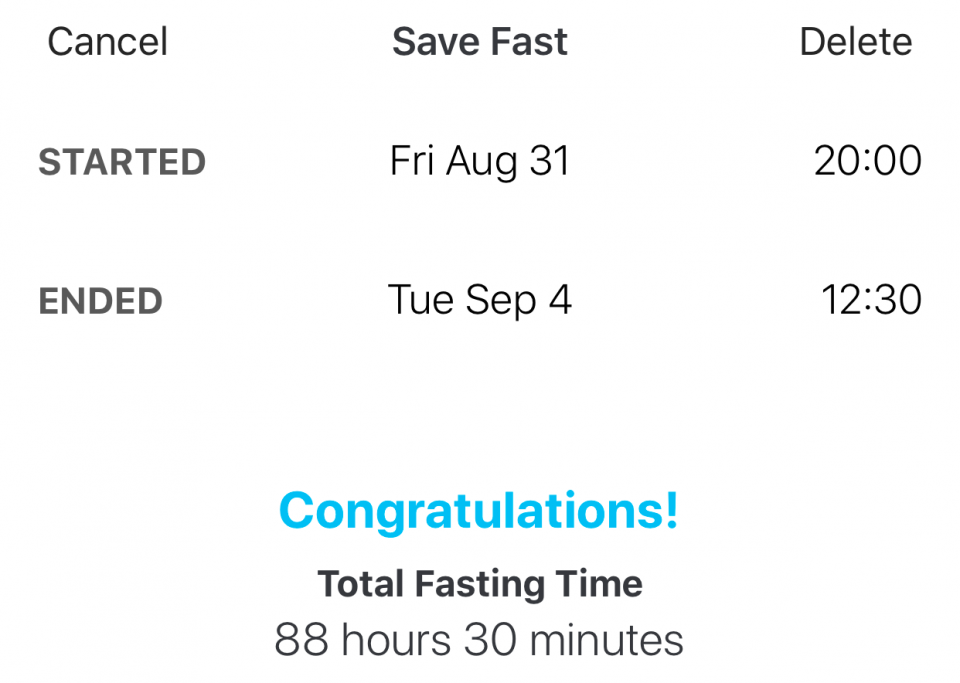 It wasn't my intention to go 88.5 hours, but I was feeling pretty good and had no social obligations to eat, so I just kept going.

The only reason I stopped? Because I'm about to hit the road again. If I was going to have any digestive issues that come from reintroducing food after so long, I'd rather be at home--which, it turned out, was a good call.

For those who are concerned that more than three days is too long to fast, there's the story of Angus Barbieri, who fasted for 382 days! That said, I'm aware that there are pros and cons to extended fasting.

I have to say, this has been the easiest fast I've done. It may be because I supplemented with potassium, magnesium, and sodium (via broth). I don't want to give exact amounts of these, as everyone is different, and I'm pretty sure I may want to adjust the amounts given how my system has been eliminating waste, especially after I ate. This is a known side effect of too much magnesium (see Magnesium Citrate). That said, from what I've read, these essential minerals are definitely helpful, especially if you are fasting.

When I felt hungry, which honestly, wasn't often, I drank coffee, tea, or (twice a day) chicken broth with extra salt. Yes, I was craving salt, and I went with it. The second day of my fast, I did have a headache, which seemed to go away after I had a cup of broth.

In general, I had my normal amount of energy during the fast. Mentally, I felt very sharp. My blood glucose gradually reduced during the 3 days as well, from about a 98 mg/dL (or 5.5 mmol) to 69 mg/dL (3.9 mmol), which is the lowest I've ever had!

In terms of weight loss, I lost a little over 5 pounds (or just over 2 kilos) during my fast. Unfortunately, this got me back to just under 230 pounds (or about 104 kilos), a weight I've been hovering around for the last several months.

Will I do this again? Probably, but I'll do it when I'm home and don't have social obligations.