I've struggled with my weight pretty much my whole life. As I got older, this lead to hypertension (high blood pressure), diabetes (of the second type), and the other things that result from these conditions being present and prolonged. I have been going to the doctor pretty regularly the last few years to try and get a handle on my diabetes, but had not been very successful at maintaining any sort of positive momentum.

Earlier this year, I was introduced to 1(http://intensivedietarymanagement.com/) and The Obesity Code. I can basically summarize his theory as follows: most weight gain can be explained by having too much insulin in your system. Reduce the insulin, the weight will come off on it's own.

It just so happens that Type 2 Diabetes is primarily about insulin resistance. What Dr. Fung says is that the insulin resistance is caused by the continued presence of elevated levels of insulin in the body. You know, in much the same way an alcoholic requires more and more alcohol to get drunk. Because they keep drinking.

Most doctors, of course, don't know where the insulin resistance comes from, or can't make the logical connection that seems about as obvious as minimizing your carb intake when you have high blood sugar--the exact opposite of what my diabetic "education" told me. The different macronutrients impact blood sugar levels quite differently: 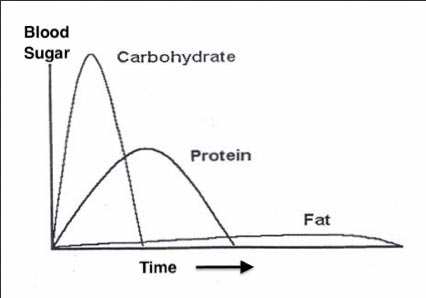 The other thing I didn't learn from my doctor is that eating anything, even something low-carb or proven to be low glycemic index, will cause an insulin spike. Which, if you have an abundance of insulin in your system already, doesn't seem like a good idea. And, as far as I know, there are no drugs around that actually reduce insulin in the system.

Enter fasting. We would not have survived as a species if we truly required three meals a day plus snacks. Fasting has been practiced for centuries for medical or spiritual purposes. Jews fast on Yom Kippur, Muslims don't eat during the day during the entire month of Ramadan. Needless to say, if it were truly bad for us, we wouldn't be here having this debate.

The kind of fasting I'm talking about is more like what Muslims do on Ramadan, which is basically have one meal a day. Another term for this is intermittent fasting. I usually have dinner but occasionally I will have lunch or even breakfast. While Muslim's don't even drink water while fasting, I drink black coffee. I may also have a cup or two of broth mid-day (not two cups at once). And yes, I've backed off on the heavy cream, except for in my post-dinner tea, even though some say that a little bit of cream is ok.

I started intermittent fasting back in May, almost on accident. I had just came back from Italy, where I, of course, pigged out on carbs, and ate shit food on the airplane. The next day, I basically fasted until dinner because, well, my blood sugar was at 179 mg/dL (definitely elevated), and I wasn't hungry. I saw the impact on my blood sugar and I just kept on doing it.

I noticed another interesting side effect of fasting, which a friend of mine had told me about: it's a pretty good cure for jet lag. Considering I have a habit of jumping 8-10 timezones, this is a very handy feature. Basically, don't eat until you get to your destination, then eat at the normal dinner time. I did this coming back from Israel in June, and it was amazing!

The results so far have been pretty amazing, both for my blood glucose: 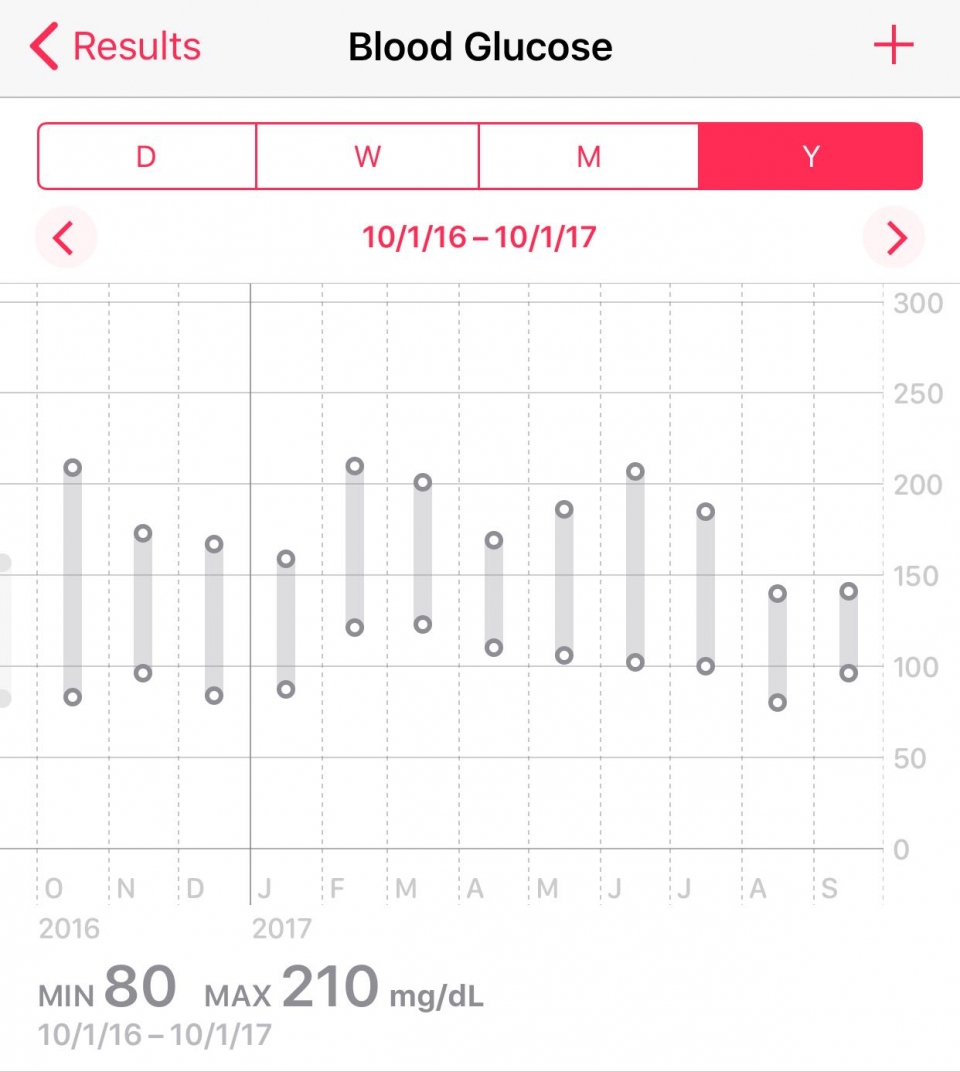 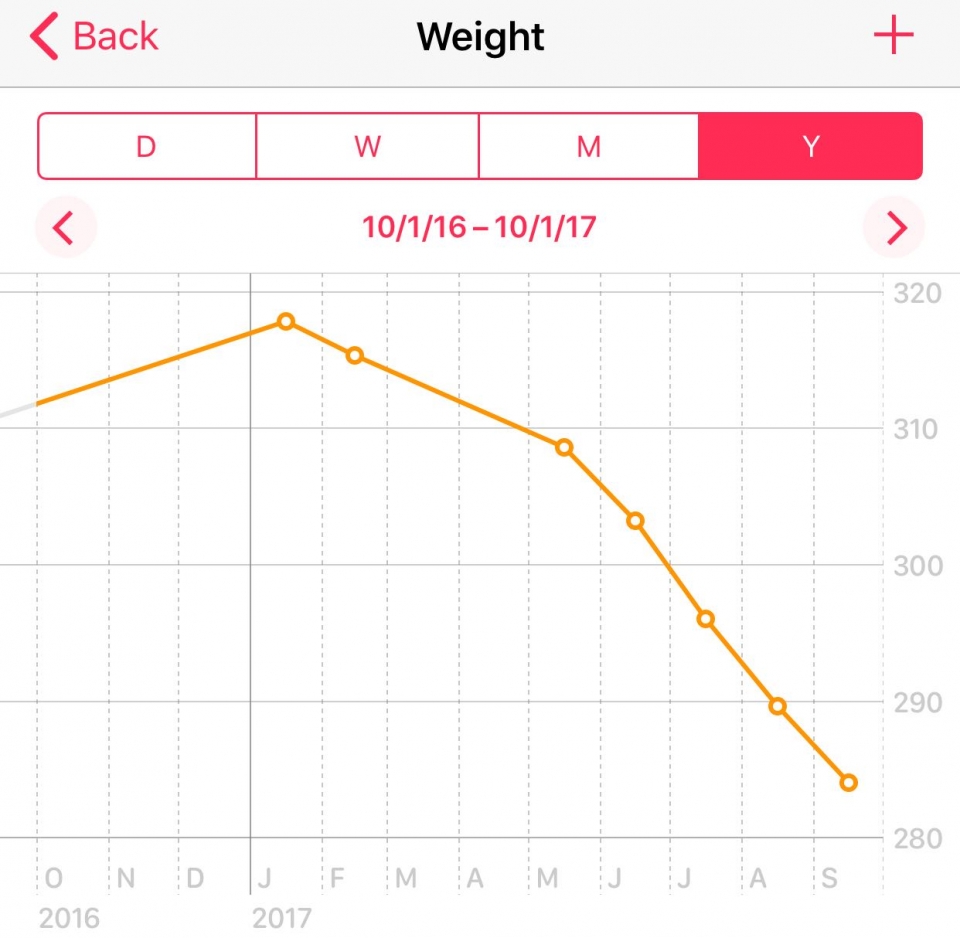 My doctor showed me my weight from a visit I did to the clinic back in 2007. I'm still about 10 pounds above that mark, but I'm a lot closer than I've been to that mark in the last 10 years. Things are definitely trending the right direction.

For sure, I am eating less food now than I was just a few months ago. In fact, I was kinda surprised when I realized just how much I'm not eating. I'm also surprised how easy it is to not eat. When it's not time to eat, I certainly notice food, but it doesn't bother me. As such, there's no willpower involved. A lot of my previous "cravings" don't exist anymore.

Further, when I do eat, I am a lot more picky about what I eat. This does mean making (overall) healthier choices, but I can also occasionally eat something off the diet. Even if I do make a mistake, I know what I need to do to get things going the right direction.

People ask me if this is sustainable. I certainly think so. In many ways, it's less restrictive because if I go somewhere that has the wrong kind of food, or even something I don't like, I can just decide not to eat. Which, as I'm finding out, is a good thing to do occasionally.

I am continuing to monitor my blood glucose. I'm doing it a little more frequently than my doctor prescribed to make sure my blood sugar doesn't get dangerously low, which is also bad. So far, that hasn't happened.